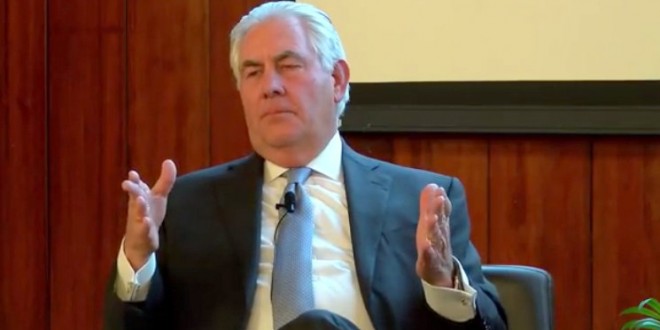 Earlier today the Family Research Council denounced Secretary of State nominee Rex Tillerson for his role in opening up the Boy Scouts to gay members. The Human Rights Campaign this afternoon declared that Tillerson might actually be too anti-gay for the job. CNN reports:

The Senate should take a hard look at ExxonMobil’s record on gay rights when it considers the nomination of Rex Tillerson for secretary of state, a leading advocacy organization says. The Human Rights Campaign, which ranks corporations on how they treat LGBTQ employees, has consistently given Exxon poor grades. Tillerson is the CEO and has worked at the company for most of his adult life.

“Rex Tillerson’s nomination raises critical questions as to how a Trump administration plans to protect LGBTQ employees and contractors affiliated with the State Department, and ultimately whether it will continue American efforts to advance equality through U.S. foreign policy,” HRC president Chad Griffin said in a statement.

On Tuesday, President-elect Donald Trump said he would nominate Tillerson to be the nation’s top diplomat. The Senate debate over his confirmation is expected to focus on Tillerson’s ties to Russia. Some Republicans have already voiced reservations. But Exxon’s history on gay rights also may come up.

When Exxon merged with Mobil in 1999, it eliminated Mobil’s domestic partner benefits for gay and lesbian employees and removed a policy preventing discrimination on the basis on sexual orientation, according to HRC. At the time, Tillerson was a senior executive responsible for the company’s operations in Russia.

The company adjusted its anti-discrimination policy in 2015 to include protections based on sexual orientation and gender identity, according to the Human Rights Campaign. That revision followed President Obama’s 2014 executive order requiring federal contractors to protect LGBTQ workers against discrimination. Exxon regularly contracts with the U.S. government.

ExxonMobil currently has an 85% rating from the HRC. Because Obama.

Previous RNC Spox Sean Spicer On Hacking: John Podesta’s Email Behavior Is Why This Is Even A Story [VIDEO]
Next OKLAHOMA: Legislature Approves Bill Ordering Many Businesses To Place Anti-Abortion Signs In Restrooms