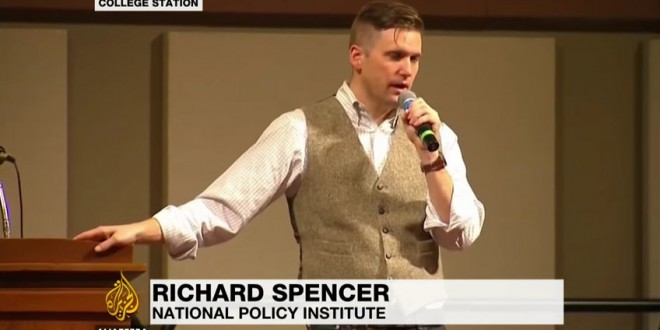 Hundreds of people protested a speech given by the white nationalist and member of the so-called alt-right, Richard Spencer, at the University of Texas A&M Tuesday. The College Station, Texas, university did not invite Spencer to speak and said his views are “in direct conflict with our core values.” Spencer was invited to speak by a former student who rented out space on campus.

Law enforcement officers with riot shields were seen pushing protesters from areas inside the Memorial Student Center where Spencer was giving his speech. Several groups also protested the speech outside the building. The video was posted online by the college student newspaper The Battalion. Police said two people were arrested, and neither were students.

Inside, around 400 people turned out to see Spencer, some of whom jeered him, The Associated Press reported. There was at least one physical confrontation when the microphone was taken from a woman who repeatedly asked if Spencer was a racist.

Spencer spoke for more than an hour, calling for white people to embrace an identity and retake control of America. Twice, skirmishes broke out as audience members shoved each other and jostled for position near the stage. Meanwhile, protestors outside the event surrounded some of the entrances to the student center. Police in riot gear eventually blocked off the doors and cleared out the rest of the building. “This is our goddamn country,” Spencer shouted at one point, raising his fist in the air.

He spoke calmly, often with a smirk. But the hecklers did grab his attention and he responded to many of their taunts. Throughout the speech, a woman dressed a clown suit wandered through the room holding signs with messages like “He’s the Bozo.” When she passed in front of the stage, Spencer said, “She’s dancing. Perhaps she will lose some weight.”

Later he addressed a man wearing a shirt that said “BTHO Hate.” The shirt was a reference to a football cheer that A&M fans commonly yell — hoping to “beat the hell outta” the team they are playing. Spencer said the shirt incited violence, and asked why the man wasn’t attacking him. “You are white coward,” he said. “You are not even willing to do that. That t-shirt is total bullshit. You are not even willing to go to the gym. Look at how fat you are.”