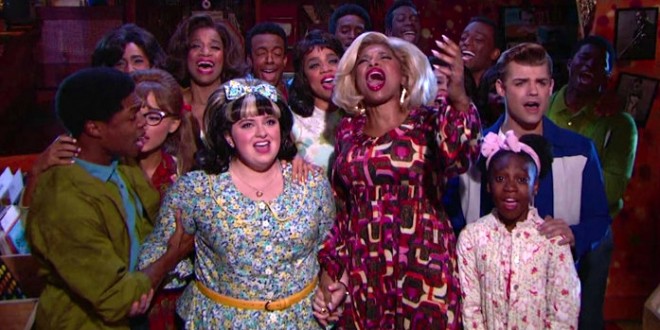 It’s hard to imagine better casting for the production. Jennifer Hudson stole the show, once Motormouth Maybelle got to the screen; Ariana Grande, certifiable pop star, came away as the show’s MVP, acting as both reliably overlook-able sidekick and, once the situation required it, showstopping diva. Harvey Fierstein was predictably great, reprising his role from Broadway as Edna. Martin Short, frequently misused, found the right profile for himself as Wilbur.

Derek Hough, who can often be a distractingly energetic presence, was priceless as Corny Collins (is there a way he could just play that character, forever?). Ephraim Sykes and Shahadi Wright Joseph, both Broadway veterans despite their young ages, broke out onto the mainstream consciousness in a big way. Their number “Run and Tell That” was one of the first big hits of the evening.

The emotional highlight of the production was Hudson’s knock-out delivery of “I Know Where I’ve Been.” The anthemic call for social action has taken on added resonance in the nation’s post-election political climate, probably more so than it had when NBC chose “Hairspray” as this year’s holiday tuner back in January.

“Hairspray Live!” was clearly influenced by Fox’s production of the Emmy-winning “Grease: Live” — which had the performers scrambling across a massive lot in between numbers, with a live audience on hand to provide applause and laughter. NBC has now done four of these live musicals, starting in 2013 with “The Sound of Music,” and with each one has improved on the high-wire act of mounting a stage production for TV.

Like Variety does, other outlets have noted the occasional technical flubs and some awkwardness with staging, but without exception last night’s show is being heralded as the best of NBC’s live Broadway productions.