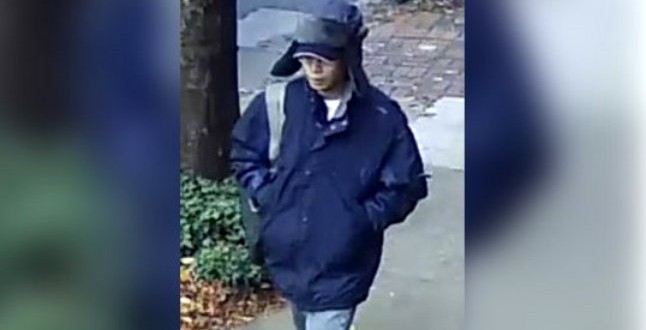 Police on Thursday released photos and video of a person of interest in connection with last week’s package bomb that severely injured a man inside his Center City residence. At an afternoon news conference at police headquarters, Commissioner Richard Ross Jr. said the person of interest is seen on camera dropping the package off at Jim Alden’s home in the 1800 block of Pine Street.

Alden suffered injuries to his face and torso after he opened the package around 4 a.m. Nov. 22. Police referred to the person of interest as a male but said they couldn’t be certain. Detective Timothy Brooks said investigators believed the person was Asian and between late teens and early 30s. The person wore a baseball cap and an “Elmer Fudd” cap with ear flaps, police said. Alden did not recognize the person, police said.

Alden, who is cooperating with officials doesn’t know why he was targeted, said Philadelphia Police Commissioner Richard Ross. Alden, 62, released a statement Tuesday updating people about his progress and thanking everyone for the support. “What I want to say at this point is how overwhelmed I have been at the outpouring of love and support that I’ve received from my partner, family, friends, and coworkers,” Alden wrote.

On Nov. 22, Alden arrived home at his apartment on the 1800 block of Pine Street after being out of town to find the package that he thought contained asthma medication addressed to him. As he opened the package the contents inside exploded. The envelope, which was rigged with a bomb, contained some type of shrapnel, causing injuries to Alden’s face, chest and arms. Alden, who pursued a career in theater before working as a restaurant manager and caterer at the Warwick Rittenhouse Hotel, faces more surgeries and a long road to recovery.

Investigators initially speculated that the bombing might be related to a domestic or personal dispute, but that possibility appears to have been dropped. Alden’s home has a “Love Trumps Hate” rainbow sign in the front window.

Wanted: Suspect for Questioning for an Explosion in the 9th District [VIDEO] https://t.co/jSpOurqZ8m pic.twitter.com/yVhZTbFqFC