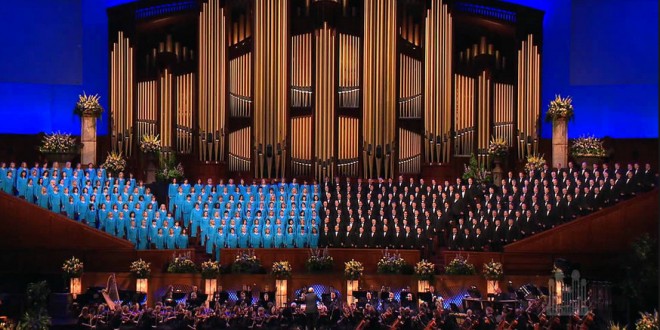 While big-name singers are evidently saying no to performing at Donald Trump‘s inauguration, one of the only well-known acts to say yes has been the Mormon Tabernacle Choir. They’re on a slate filled with Kid Rock, Ted Nugent, and an apparently divided group of Rockettes. The Church made clear that this isn’t a political statement. They were invited and said yes; reading anything more into it would be wrong. [snip]

But for now, just remember that the Mormon Church is celebrating the election of a man who defies so many of the positive stereotypes people have of the faith. Not since the Church’s support of Proposition 8 have they handed their critics such a potent weapon to use against them. This decision is just another reason sensible people should avoid joining and supporting the LDS Church.

From the petition, which has 13K signatures at this writing:

We, as signers of this petition, believe that The Church of Jesus Christ of Latter-day Saints’ decision to allow the Mormon Tabernacle Choir to perform at the upcoming presidential inauguration of Donald Trump DOES NOT reflect the values of Mormonism and does not represent its diverse 15+ million members worldwide.

We also believe that an official LDS organization performing at a presidential inauguration gives the perception that the LDS Church and its diverse 15+ million members worldwide support an incoming president’s agenda, values and behaviors. Performing at other government events would not be a concern (e.g. national holidays such as July 4th).