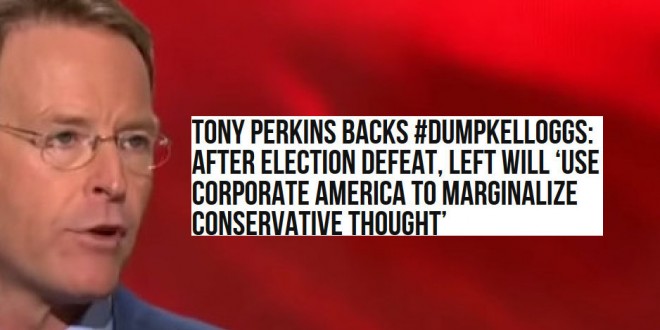 Perkins: The Left Is Using Kellogg’s As Their “Weapon Of Choice” Now That They’ve Lost Power [AUDIO]

Breitbart really is a perfect fit for Tony Perkins, considering his history of working with David Duke and keynoting for white supremacists. Via Breitbart:

“The Left has lost control of the government – at least, it’s about to – which they have used to basically punish dissenting thought, when it comes to their politically correct agenda. So now there is this, it appears to be [a] rapid move to consolidate their control of corporate America – to use them to be their tool or their weapon of choice,” Perkins said, putting the Kellogg’s boycott of Breitbart News into the context of the 2016 election.

“I think they were thinking they could just get away with this,” Solov replied. “I mean, they could have, if they wanted to, stop advertising on our site and frankly not made any announcement about it. But they came out and they made the announcement that they were blacklisting us because Breitbart.com and its readers – and by the way, we have 45 million readers…”

Perkins interjected, “I love to have our articles up there on Breitbart because we get a lot of feedback when they’re up there because a lot of our conservative Christian listeners, readers, go to Breitbart for information.”

“This is a political hit,” Solov continued. “It is in part, as you mentioned, because Steve Bannon is now in the White House, and it is an effort to denigrate, I think, the mainstream American values that we hold dear. Breitbart is, as you know, the most pro-family, pro-traditional American values news brand in the English language.”