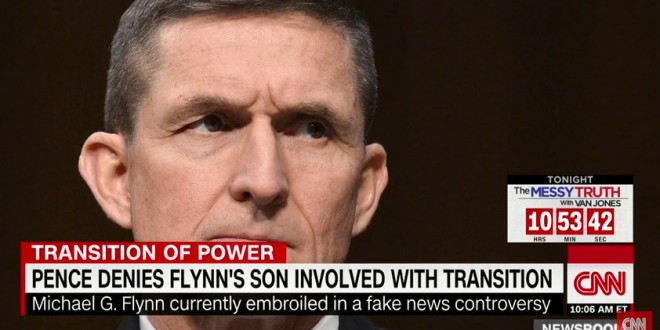 Vice President-elect Mike Pence, appearing on MSNBC’s “Morning Joe” program, insisted on Tuesday that the son of retired Lt. Gen. Michael T. Flynn, who posted a baseless conspiracy theory on Twitter on Sunday night, has “no involvement in the transition whatsoever.”

Yet the son, Mike Flynn Jr., has sat in on some transition meetings and lists it as part of his biography. He has a transition email and has served as General Flynn’s chief of staff.

The discussion arose from the younger Flynn’s tweet supporting the conspiracy theory that somehow Hillary Clinton and her campaign chairman, John Podesta, ran a child sex-trafficking ring out of a Washington pizzeria, a conspiracy that prompted an armed attack on the restaurant on Sunday.

Mr. Pence will speak Tuesday night at a Heritage Foundation event at, where else, the Trump International Hotel in Washington. No word yet what Heritage is paying the Trump Organization for the space.

Previous Breitbart: Kellogg’s Might Kill Your Children
Next SECRETARY OF HATE: Pat McCrory To Meet With Trump