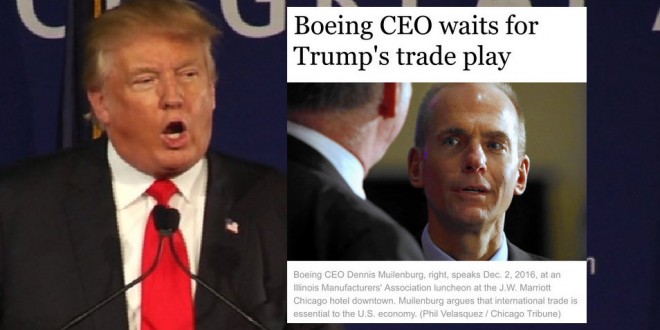 Seemingly out of nowhere on Tuesday morning, President-elect Donald Trump bashed Boeing on Twitter, declaring the company’s costs “out of control,” and saying the government should cancel an order with the company for two new Air Force One jets.

As it turns out, that seemingly random outburst against the aerospace company came within an hour after the Chicago Tribune published a column quoting Boeing CEO Dennis Muilenburg offering some tepid criticism of Trump’s aggressive trade rhetoric against China. “Muilenburg suggests the Trump team, and Congress, back off from the 2016 anti-trade rhetoric and perceived threats to punish other countries with higher tariffs or fees,” read the column, by Robert Reed.

“Instead, he suggests they get down to the business of advocating a stronger U.S. agenda during ongoing or upcoming trade negotiations with other countries. ‘If we do not lead when it comes to writing these rules, our competitors will write them for us,’ he said.”

Trump has not definitively stated that the Tribune column was the impetus for his anti-Boeing remarks, but the president-elect is famous for using Twitter to respond, in real-time, to perceived slights in the media.

This story in which Boeing CEO expressed concerns about Trump’s views on trade posted just before Trump tweet —https://t.co/aBvK87GzzW