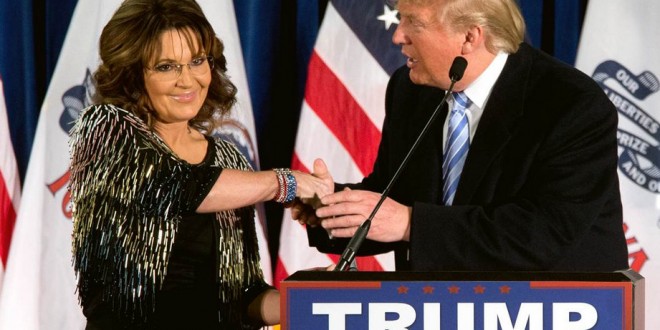 From Palin’s op-ed for the Young Conservatives site:

When government steps in arbitrarily with individual subsidies, favoring one business over others, it sets inconsistent, unfair, illogical precedent. Meanwhile, the invisible hand that best orchestrates a free people’s free enterprise system gets amputated. Then, special interests creep in and manipulate markets. Republicans oppose this, remember? Instead, we support competition on a level playing field, remember? Because we know special interest crony capitalism is one big fail.

Politicians picking and choosing recipients of corporate welfare is railed against by fiscal conservatives, for it’s a hallmark of corruption. And socialism. The Obama Administration dealt in it in spades. Recall Solyndra, Stimulus boondoggles, and all their other taxpayer-subsidized anchors on our economy. A $20 trillion debt-ridden country can’t afford this sinfully stupid practice, so vigilantly guard against its continuance, or we’re doomed.

Reaganites learned it is POLICY change that changes economic trajectory. Reagan’s successes were built on establishing a fiscal framework that invigorated our entire economy, revitalized growth and investment while decreasing spending, tax rates, over-reaching regulations, unemployment, and favoritism via individual subsidies. We need Reaganites in the new Administration.

Of note is that Trump once sued Carrier:

President-elect Donald Trump is singing the praises of Carrier Corporation after brokering an agreement with the company to keep 800 domestic factory jobs that were slated to go to Mexico. The deal was a significant political win for Trump, suggesting he could bend the air conditioner and furnace manufacturer to his will after vowing to make an example of the company on the campaign trail. But it also represented a reversal of fortune. Trump was less successful when he sued Carrier over a malfunctioning air-cooling system at the Trump International Hotel in New York City.

In an October 2007 decision, federal judge Shira Scheindlin ― whom Trump maligned in the first presidential debate as a “very anti-police judge” for halting New York City’s stop-and-frisk policy ― handed Carrier a partial victory in its quest to fend off Trump’s legal challenge, granting its request to dismiss Trump’s negligence claim but denying its requests to dismiss breach of warranty and breach of contract claims. Later that year, the company settled with Trump on the claims the judge upheld.