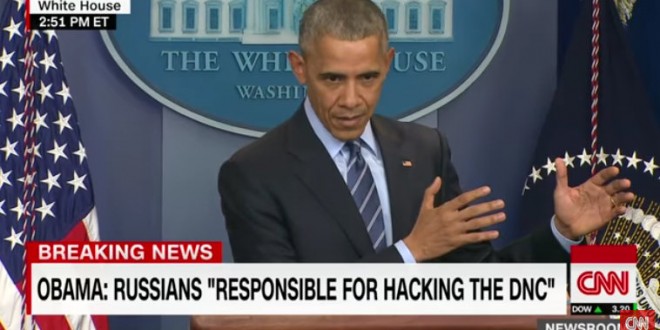 Obama Slams Republicans For Siding With Russia: Ronald Reagan Would Roll Over In His Grave [VIDEO]

President Barack Obama asserted Friday that a September confrontation with his Russian counterpart prompted Moscow to cease its hacking of the US election.

During a meeting on the sidelines of the Group of 20 summit in China, Obama said he insisted President Vladimir Putin “cut it out” and told him “there were going to be serious consequences if he didn’t.”

“In fact we did not see further tampering of the election process,” Obama said at a year-end news conference. “But the leaks through WikiLeaks had already occurred.”

He unleashed a string of putdowns, describing America’s Cold War adversary as “a smaller country, they are a weaker country. Their economy doesn’t produce anything anyone wants to buy except oil and gas and arms. They don’t innovate.”

Obama attacked Republicans for siding with an arch-enemy of the United States because of their dislike of Democrats. “Ronald Reagan would roll over in his grave,” Obama said of recent GOP praise of Russia.

He warned, “Mr. Putin can weaken us just like he is trying to weaken Europe if we start buying into notions that it is okay to intimidate the press or lock up dissidents.”