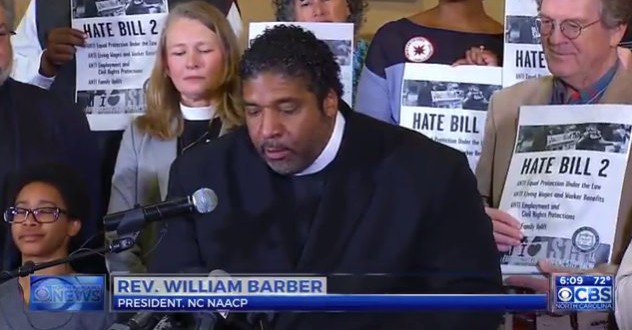 “We believe either attempting to stack the Supreme Court or deciding the governor’s race in the legislature is, and would be, a major civil rights violation of the right to vote and equal protection under the law,” Barber told hundreds of demonstrators at the state Capitol in Raleigh. “We pledge to fight with every legal and moral tool we have, including, if necessary, mass civil disobedience.”

Barber joined the ranks of those concern that the Republican majority in the N.C. General Assembly would appoint two new justices to the state’s High Court in order to offset the 4-3 Democratic majority Morgan’s Election Day victory resulted in. Thus far, GOP legislative leaders claim that they haven’t discussed it with their caucuses.

And this happened late yesterday afternoon:

The North Carolina state elections board approved Gov. Pat McCrory’s appeal to recount the votes in Durham County, giving a glimmer of hope to his last-ditch attempt to win reelection. McCrory, a Republican, had claimed that inaccurate ballot machines prevented a proper tally of 90,000 early votes in Durham County, a liberal hotbed that swung the race to Democrat Roy Cooper at the eleventh hour on the night of the election.

Members of the state board said there was sufficient doubt in the outcome to justify recounting the results there, and overturned a November 18 decision by the Durham County elections board that rejected McCrory’s request for a recount. The state board, consisting of three Republicans and two Democrats, voted 3-2 along party lines to authorize the recount.

“It’s necessary that the public have faith and confidence in the system,” James Baker, a Republican board member, said at the hearing on Wednesday. “Let’s get it all out in the open.” The decision is good news for McCrory, who is facing calls to concede from opponents, including Cooper himself. His initial Election-Day deficit of about 4,500 votes has mushroomed to more than 10,000 as absentee and provisional ballots are tallied.