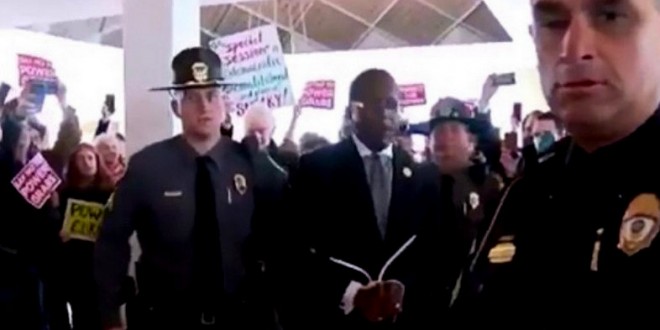 Amid a tense and dramatic backdrop of outrage and frustration, the Republican-controlled state legislature on Friday approved a sweeping package of restrictions on the power of the governor’s office in advance of the swearing in of the Democratic governor-elect, Roy Cooper. Protesters spent a second day chanting and disrupting debate. Some were arrested and led away from the state legislative building in plastic wrist restraints.

The deliberations took place as hundreds of outraged Democrats descended on the legislative building for an emotional and boisterous protest. Many had tried to watch the proceedings in the House and Senate galleries, but were removed after yelling and chanting. A number of people were arrested throughout the day in acts of civil disobedience. A number of them waved signs that read, “Say No to Power Grabs.”

About 2:15 p.m., the Rev. William Barber II, the president of the state N.A.A.C.P., arrived outside the legislative chambers. Mr. Barber, a leader of the “Moral Mondays” movement, which has orchestrated civil disobedience protests here since 2013, made his way with the aid of a cane to the locked door of the Senate gallery. Surrounded by about 200 electrified protesters, he began rapping on the door with his open palm and with a big ring, keeping time as the chants grew louder.

The crowd turned its attention to the House chamber, which was also locked. A number of people also knocked, and, after warnings from the Capitol Police, were arrested and led away.