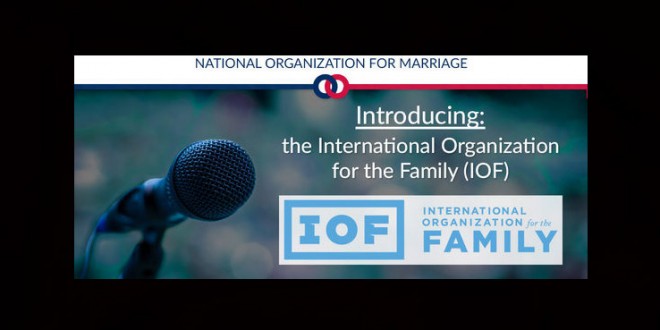 As you may know, NOM has increasingly been asked to play a role in preserving marriage in other countries that have been dealing with many of the issues we’ve confronted here in the US. I’ve spoken about marriage all over the world, and have been targeted by LGBT extremists groups for doing so, including an ominous publication by the Human Rights Campaign (HRC) accusing me of “exporting hate.” But no amount of attacks from LGBT extremists like the HRC will deter me from proclaiming the truth of marriage whenever and wherever it is under attack.

I want to introduce you to a new organization that will take the global fight to preserve and protect marriage to a whole new level, allowing NOM to be able to focus fully on the continuing fight here at home. It is called the International Organization for the Family (IOF).

I will be the president of IOF while continuing to lead NOM. IOF is assembling a coalition of allies to take the worldwide lead in fighting for marriage, religious liberty, parental rights, the truth of gender and other issues central to the pro-family movement.

With the advent of IOF, NOM will be able to focus all our efforts here in America, where we have tremendous opportunities to reshape the culture and legal climate for marriage. We look forward to working with President-Elect Trump, the Congress and our allies in Washington and the states to pursue a wide ranging agenda on behalf of our issues.

This is a great development for the international pro-family movement. Pease keep IOF in your thoughts and prayers. And please continue to support NOM as we focus all of our efforts on the opportunities in front of us.

Back in May, Brown was elected president of the World Congress of Families. It’s not clear how this new hate group will be different.

Previous REPORT: Trump Has Tapped Zillionaire Putin Crony And Exxon CEO Rex Tillerson To Be Secretary Of State
Next Trump Tells Fox News: Stories About Russians Hacking To Help Me Are Just A Ridiculous Excuse [VIDEO]