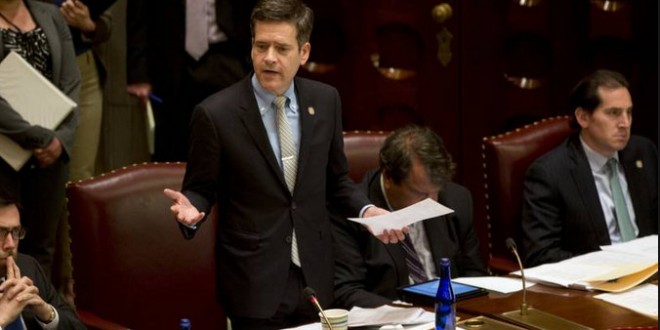 The New York Times loves the idea. From their editorial board:

President-elect Donald Trump refused to release his tax returns during the campaign and there is no sign that he will, ever. He broke longstanding tradition and set a terrible precedent for future presidential candidates.

Good government groups have been wringing their hands about what to do. Now comes an excellent idea from a New York State senator, Brad Hoylman, a Democrat from Manhattan, that would could force candidates to disclose their tax returns by making it a requirement for getting on the ballot.

Mr. Hoylman says that he plans to introduce a bill that would require presidential and vice-presidential candidates to disclose up to five years of their tax returns 50 days before the general election. The state’s Board of Elections would publish the returns on its website.

Candidates who fail to provide the documents would not appear on the state ballot and the state’s Electoral College electors could not vote for them. This is a smart proposal not just for New York but for other states as well. Even if a handful of states imposed the requirement, all major party nominees would have to disclose their tax returns.

Mr. Trump might well challenge such a law if he seeks a second term and wants to continue hiding his tax returns. As drafted, the bill should withstand constitutional scrutiny, said Laurence Tribe, a constitutional law scholar at Harvard. “Ballot access requirements vary significantly from state to state, and it seems that N.Y. might be able to simply add tax disclosure as a procedural ballot access requirement,” he wrote in an email.