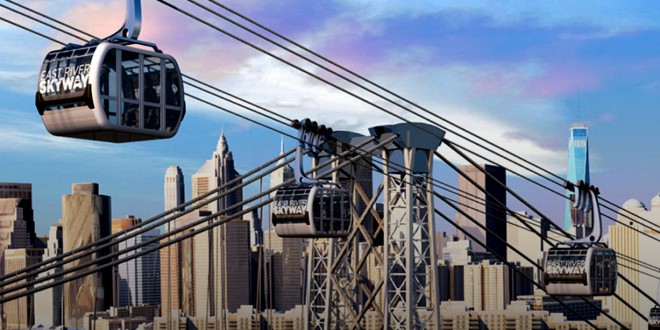 Two years ago I reported that a business group had proposed a privately-operated $100M gondola system (much like existing the Roosevelt Island Tramway) which would connect Brooklyn and lower Manhattan. The proposal soon vanished into “neat idea but not gonna happen” history but now it has new life with the coming years-long closure of the L train forced by damage sustained by 2012’s Hurricane Sandy. The Brooklyn Eagle reports:

Assemblyman Joseph Lentol, Congresswoman Carolyn Maloney and Council Member Stephen Levin recently wrote a letter to Mayor Bill de Blasio urging him to seriously consider the East River Skyway, not only as a transportation alternative during the L train closure, but also as a way to increase capacity and resiliency for years after. Brooklyn Borough President Eric Adams also voiced his support for the gondola plan in a separate letter to the mayor. The gondola would provide relief to the hundreds of thousands of commuters who use the L train daily.

“What’s very encouraging is that everyone on the team is very excited and enthusiastic about the fact that we really can deliver this in a period of a couple of years, which is just radically different from what New Yorkers are accustomed to for transportation projects,” Levy told the Brooklyn Eagle. “For example, if you look at the Second Avenue subway, how many decades has that been under planning and actual construction and the mass displacement that has occurred in that area? Not to mention the $4 to 5 billion dollars that has been spent.

“People fundamentally want a solution. When [the East River Skyway] is presented and they see that it can be built very quickly, at low cost, this can be very inexpensive for people to ride, it’s going to be incredibly quick, it’s going to be absolutely silent, totally green. It literally checks every box that you want to check. And it’s going to look beautiful.”

According to Levy, the tramway will have the capacity to transport 200,000 daily passengers, and each individual gondola car would be able to carry 35 to 40 passengers at a time. The entire system would move about 5,000 passengers per hour in each direction. In comparison, the L train transports about 400,000 people daily, according to MTA spokesman Kevin Ortiz.

The ride would reportedly take five minutes with trams leaving each station at 30 second intervals. The proposed cost to riders would be $25 for a monthly unlimited rides card. (The Roosevelt Island tram is operated by the US subsidiary of an Italian-French company but uses the MTA’s MetroCard fare system.) See the website for the proposed system here.