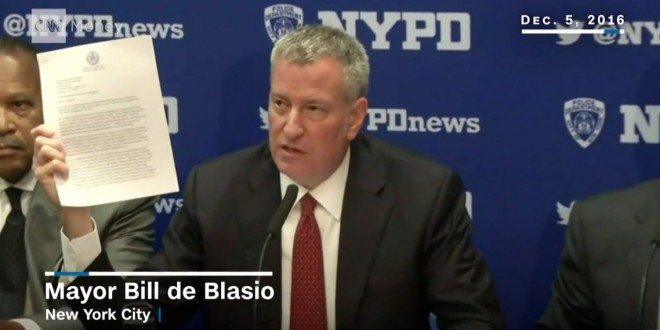 Mayor de Blasio is sending the Obama administration a $35 million bill for the cost of securing Trump Tower from the time President-elect Donald Trump won the race through Jan. 20 — an average of over $400,000 a day, officials said on Monday.

De Blasio, in a press conference with Police Commissioner James O’Neill, said that he is sending a letter to President Obama laying out the costs. He also said he called Trump’s pick for Treasury Secretary Steve Mnuchin to talk about security reimbursement costs after Trump takes office. “We had a good conversation,” said de Blasio.

The $35 million bill, which covers Nov. 8 through Jan. 20, covers pretty much all of the reimbursement costs. De Blasio has repeatedly said he expects the city to be paid back for the huge costs of providing security for the new First Family.

Previous Trump: I Wouldn’t Have To Tweet So Many Batshit Crazy Lies If The Dishonest Media Didn’t Force Me Into It
Next NRA Head Wayne LaPierre Predicts End To Gun-Free Zones, Background Checks, And Open Carry Bans