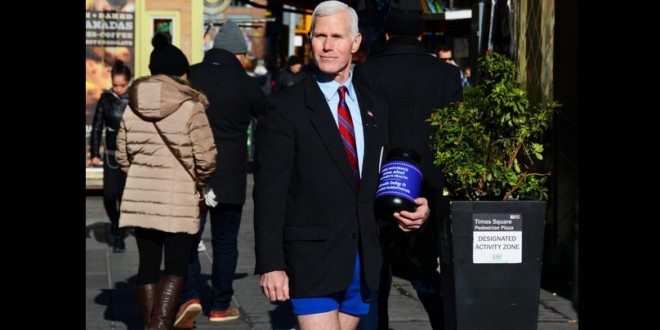 In a sobering post-election period, Glen Pannell has figured out a way to make us smile — one pants-less donation at a time. The graphic designer and actor bears more than a passing resemblance to Vice President-elect Mike Pence, and now he is using that genetic stroke of luck to help others as a part of a tongue-in-cheek impersonation that also raises money for causes close to his heart.

“I was really dejected after the election and spent a month as a prisoner of my Facebook feed,” he tells PEOPLE. “But then I decided to do something to make a difference and put my likeness to Pence to good use.”

Anchoring himself in the tourist mecca known as Times Square last Saturday, the 51-year-old New Yorker transformed into Mike Hot-Pence as he donned a conservative-looking suit jacket and tie from the waist up, and just a vintage pair of short-shorts down below as he held a jar seeking donations for Planned Parenthood.

Pannell admits that despite his humorous depiction of Pence, the Indiana governor’s policies make him “very afraid.” “He was on my radar before the election not because he looked like me but because of his record,” he says. “I have family in Indiana and knew about the ‘religious freedom’ bill. As a gay man I stood up and took notice.”