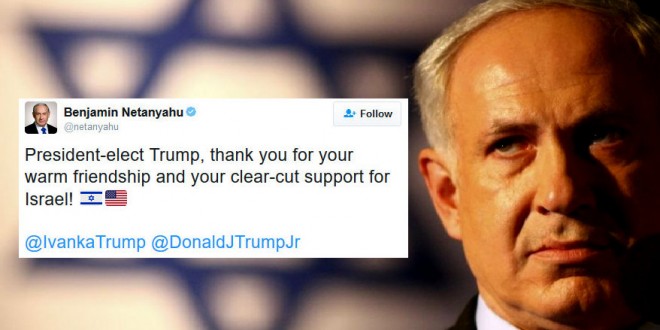 Says it all, doesn’t it? The Washington Post reports:

President-elect Donald Trump tweeted messages Wednesday showing his support for Israel and accusing President Obama of making inflammatory statements and damaging relations between Israel and the United States. Trump tweeted that he could no longer allow Israel to be treated with disdain and urged Israel to “stay strong” until he takes office on Jan. 20.

The messages came hours before Secretary of State John F. Kerry was scheduled to give a speech outlining the Obama administration’s vision for resolving the conflict between Israelis and Palestinians. On Friday, the United States, in a break with a long-standing policy, decided not to use its veto power to prevent the passage of a United Nations Security Council resolution criticizing Israeli settlements.

Most notable part of this tweet is that he tags Donald Trump Jr., who is supposed to be operating the Trump Organization https://t.co/1MpHml9nXT

Eric must have major FOMO right about now https://t.co/kIKK1SXcrY

We are now all reduced to spectacle of a smirking Israeli PM tweeting to the American President-elect & his children https://t.co/7cIENVNbil