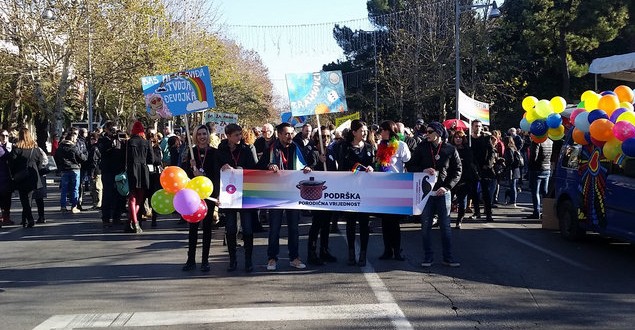 Dozens of people have participated in a gay pride event in highly conservative Montenegro where authorities are promising to boost gay rights as part of efforts to join the European Union.

Hundreds of policemen deployed Saturday in downtown Podgorica, the capital, to prevent possible attacks from extremists. Participants in the pride march carried banners reading “born this way” or “equality for everyone.”

Activist Danijel Kalezic says Montenegrin gays no longer want to hide. “We don’t have enough support from our fathers, mothers, siblings or relatives,” he said. Montenegro’s government has announced plans to introduce gay partnership as part of its pro-EU agenda. Initial pride events several years ago were marred with incidents.

“Marred with incidents” in putting it mildly, as I reported at the time. The first parade in 2013 resulted in tear gas and bloody battles between riot police and skinhead extremists. Previous Breitbart: Mock Your Liberal Friends And Family With Our “Precious Snowflake” Christmas Ornament
Next PHILIPPINES: Self-Proclaimed Murderer President Threatens To Boot Out US Military Over Aid Package