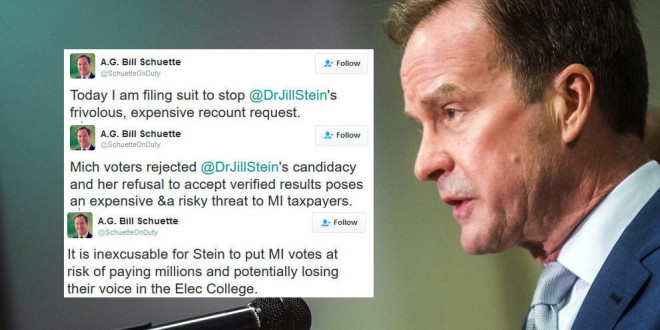 Michigan’s attorney general has asked the state Supreme Court to block a potential recount of the state’s presidential vote, which was won by his fellow Republican, Donald Trump.

Attorney General Bill Schuette, like the Trump campaign, argues that Green Party candidate Jill Stein cannot seek the recount because she was not “aggrieved” to the point at which a potential miscounting of votes could have cost her the election. She garnered 1 percent of Michigan’s vote.

The filing Friday delayed the start of a state election board meeting to consider Trump’s request to block the hand recount of all 4.8 million ballots cast in Michigan. Trump defeated Democrat Hillary Clinton in Michigan by 10,700 votes. A recount is already underway in Wisconsin. Stein also wants a court-ordered statewide recount in Pennsylvania.

You may recall that Schuette was a relentless opponent of same-sex marriage. Michigan’s DeBoer v Snyder was one of the four cases that were consolidated under Obergefell.