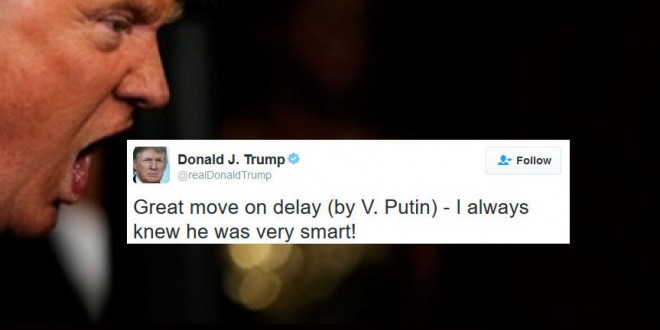 President-elect Donald Trump on Friday lauded Russian President Vladimir Putin as “very smart” for not retaliating against the U.S. for new sanctions unveiled this week. President Obama on Friday announced that 35 Russian diplomats were being expelled from the U.S. as well as a wide swath of economic sanctions.

The move was in retaliation after the U.S. intelligence community determined that Russia was behind hacks of Democratic operatives and groups during the election. Putin on Friday announced he wouldn’t retaliate for Obama’s sanctions, instead waiting to work with Trump after his inauguration next month.

Great move on delay (by V. Putin) – I always knew he was very smart!

Previous Texas State Official Who Called Hillary The C-Word Seeks To Be Rewarded With Trump Cabinet Position
Next NORTH CAROLINA: Dem Gov-Elect Wins Temporary Reprieve From GOP Law Stripping Some Of His Powers