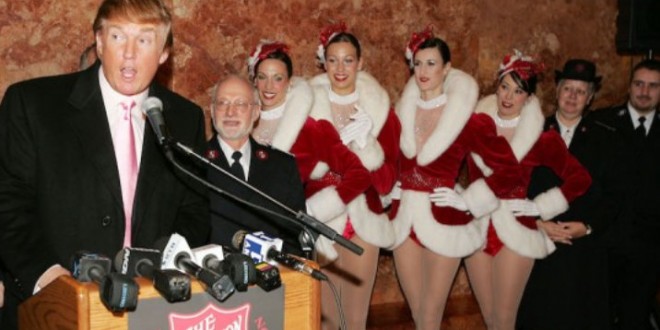 One day after their union effectively said, “Dance or get fired.” Broadway World reports:

Madison Square Garden has released a statement regarding the ongoing story that Rockettes are required to perform at the Presidential inauguration or risk being fired.

“The Radio City Rockettes are proud to participate in the 58th Presidential Inaugural,” read the statement in The Hollywood Reporter. “For a Rockette to be considered for an event, they must voluntarily sign up and are never told they have to perform at a particular event, including the inaugural. It is always their choice. In fact, for the coming inauguration, we had more Rockettes request to participate than we have slots available. We eagerly await the inaugural celebrations.”

Broadway World previously had obtained and confirmed the authenticity of an email sent from the American Guild of Variety Artists to Rockette members as a response to the announcement that some Rockettes did not want to participate in the inauguration of President-elect Donald Trump.

The email read: “We have received an email from a Rockette expressing concern about getting “involved in a dangerous political climate” but I must remind you that you are all employees, and as a company, Mr. Dolan obviously wants the Rockettes to be represented at our country’s Presidential inauguration, as they were in 2001 & 2005. Any talk of boycotting this event is invalid, I’m afraid.”

I wanna perform at Trump’s inauguration.
I wanna sing HIGHWAY TO HELLhttps://t.co/fCTArIajFb

Yes, liberals — you do have to participate in ceremonies that violate your conscience. It's called the "Bake the Damn Cake Law."

Previous NEW JERSEY: Gov. Chris Christie Attacks “The Haters” For Blocking Him From Book Profits While In Office
Next Trump: I Got A “Very Nice Letter” From Putin