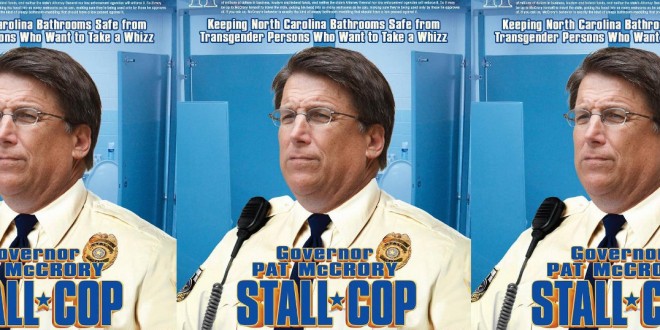 The humor publication MAD Magazine has named Gov. Pat McCrory to its annual “20 Dumbest List” because of his support for House Bill 2. The December issue spoofs McCrory as a “stall cop” with an image of the governor in a security officer uniform, a nod to the Paul Blart “Mall Cop” movies. “Keeping North Carolina Bathrooms Safe From Transgender Persons Who Want to Take a Whizz,” the caption says.

The article notes that HB2 has cost the state business and tourism and is difficult to enforce. “It may be up to McCrory himself to travel the state, poking his head into as many restrooms as he can, making sure they’re being used only by those he approves of,” MAD wrote. The Keep N.C. Safe Coalition, one of the primary supporters of HB2, also sought to share some satire about the law Friday, tweeting a cartoon of a dog using a cat’s litter box with the caption “but I identify as a cat.” It’s not about how you see yourself; the real danger @theACC is from sexual predators in women’s restrooms #LarryNation #PJNET pic.twitter.com/Q6DehPDHC6