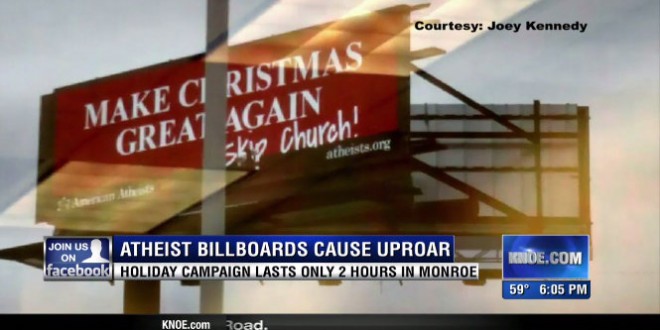 A billboard promoting atheism during the holiday season has been run out of town by Christians in Monroe, Louisiana, who deemed it too offensive for their community’s religious sensibilities to tolerate.

This message proved to be so triggering for Christians in the community that they successfully demanded that it be taken down on the grounds that it violated their religious safe space.

“I praise God that there was so much stirred up about it that it was taken down,” Monroe resident Shawn Cooper told KNOE. Nick Fish, the program director for American Atheists, told KNOE that he doesn’t regret offending people with the billboard, as he feels it’s needed to spark conversations about the role of religion in the United States.

More from the local ABC affiliate:

“The fact it says atheist Christmas goes against what they’re trying to push in the first place,” says Joey Kennedy, pastor of New Life Church of God in Bastrop. “We’re kind of the heart of The Bible Belt here. On the east coast or west coast it would probably be more accepted,” says Klitzke.

The billboards lasted less than two hours in Monroe before the billboard company, Outfront Media, suggested the organization take it down. Program director for American Atheists, Nick Fish, says the controversy in Monroe was expected.

Fish says it does not matter if their message was well-received. “They need to get over themselves and realize this is a country with a lot of viewpoints, and they’re not the only ones with a view on this,” Fish says.