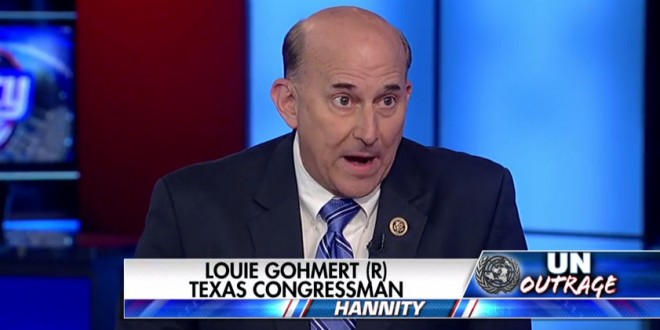 From the far-right Western Journalism:

Between Friday’s stab-in-the-back betrayal of one of the country’s closest allies and Wednesday’s insult-to-injury speech by Secretary of State John Kerry, President Barack Obama’s foreign policies are careening to the end of his term like a runaway train. But a conservative Texas congressman wants to put on the brakes.

Rep. Louie Gohmert, the veteran Republican representative from the Lone Star State and an outspoken conservative leader in Congress, told Fox News’ Kimberly Guilfoyle this week he’s joining with conservatives in the Senate by preparing a bill to cripple the United Nations by cutting off U.S. money for it.

The bill he’s preparing, he said, has twin goals. “One, we don’t give a dime to the U.N. until they rescind that resolution,” Gohmert said. “And people say, ‘oh, they’ll never do that.’ Fine, they don’t need our help to be anti-Semitic. The other is … making it a crime to use any government money to recognize Palestine as an independent country or state, because that’s what I keep hearing is going to be the next shoe to drop.”