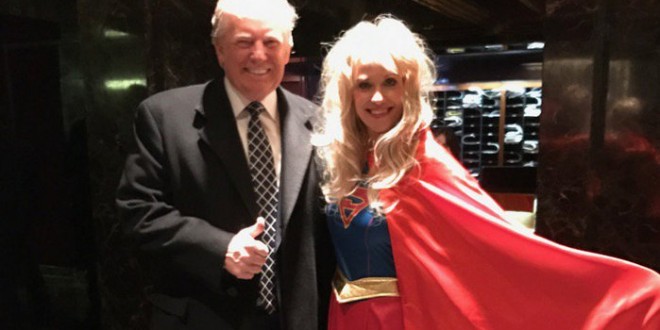 U.S. President-elect Donald Trump attended a “Villains and Heroes” costume party at a major donor’s Long Island home on Saturday night, but declined to don any garb that was in keeping with the theme.

Trump entered the party hosted by the Mercer family, one of his biggest donors, at their home in the village of Head of the Harbor in St. James, N.Y., wearing a suit and a blue and white checked tie. Security guards at the event however were dressed as biker gang members Hell’s Angels.

Trump walked into the home and gave reporters, who were not allowed inside, the thumbs up and posed briefly for photos, but did not respond to questions except to mouth “me,” pointing to himself when asked who he was dressed as.

Trump spoke briefly at the party, thanking the Mercer family, according to a member of his press team, staying for just under two hours. It was his only outing from his Manhattan home on Saturday.

An invitation to the annual December party is a coveted ticket in Republican circles, never more so than this year. Several strategists who helped engineer Trump’s upset win were attending, including incoming White House senior counselor Stephen Bannon and senior aide Kellyanne Conway.

Both Conway and Bannon have close ties to Rebekah Mercer, the daughter of hedge fund manager Robert Mercer. The younger Mercer became Trump’s leading and most influential donor and urged him to bring Bannon and Conway into the campaign in August.

Rebekah Mercer, who ran a pro-Trump Super PAC, had compared the electoral race between Trump and his Democratic opponent Hillary Clinton to an “apocalyptic choice,” so the night’s “Villains and Heroes” theme was perhaps fitting.

Previous FAREWELL FREE MARKET: Trump Vows To Impose 35% Tax On US Goods Made In Overseas Factories
Next Conway On Trump’s Many Twitter Tirades: He’s The President-Elect So That’s Presidential Behavior [VIDEO]