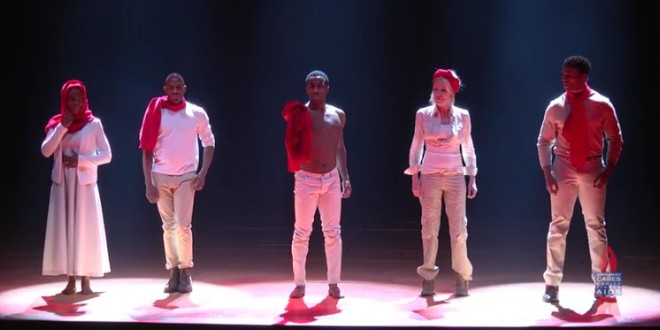 You’ll want to watch the clip below. From Broadway Cares:

Broadway’s best spread messages of unity, hope and resilience through satire, song and dance December 5 and 6, 2016, at the 28th annual Gypsy of the Year competition.

The company of Hamilton took top honors for best onstage presentation. In “America,” the cast mashed up the music and lyrics of Bob Marley and Lin-Manuel Miranda and the poetry of Langston Hughes into a call for peace and equality in our country. Javier Muñoz and Syndee Winters led the integration of song and word, with the cast channeling the duo’s sentiments into a powerful, striking dance.

The company of The Lion King was runner-up with a moving spoken-word piece giving voice to those marginalized by the current political climate. The piece, written by cast member L. Steven Taylor and choreographed by Ray Mercer, found four isolated actors, and a dancer expressing their words through movement, finding common ground in fighting for each other’s plight. The piece concluded with the performers declaring in unison, “I will never leave you alone.”

Previous Rudy Giuliani Drops Bid To Become Secretary Of State
Next OKLAHOMA: Cherokee Nation To Recognize Same-Sex Marriages Just As They Did In “Past Centuries”