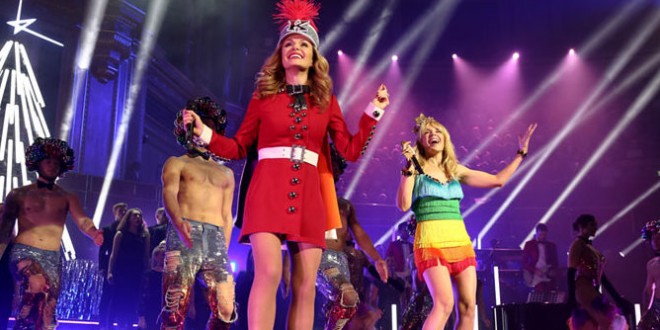 Kylie Minogue was brought to tears on stage at the Royal Albert Hall by the strength of her audience’s reaction as she brought Christmas to London’s iconic auditorium with the help of a few of her famous friends. The Australian performer delighted fans with a stunningly theatrical two-hour performance which included lavish stage costumes, a full orchestra, a band, a choir and flurry of real snow.

Performing beneath an enormous disco ball, the 48-year-old singer wowed the crowd with a mixture of Christmas classics, recent releases and a fun journey through her much-loved back catalogue. At one point Kylie, dressed in a rainbow-striped gay pride dress, was joined by famed mezzo-soprano Katherine Jenkins for a stunning rendition of Your Disco Needs You. Clearly in awe of her co-performer, the former Neighbours star grinned from ear to ear as she hugged her pal post-performance and gushed over her outfit (“didn’t she look cute?”).

There might not be another performer who would be able to pull off such an extravagantly camp and delightedly cheesy performance complete with dancing yetis, glitter-painted male dancers and walking, dancing Christmas baubles. But you wouldn’t want anybody else to do it. And there’s no doubt that Kylie’s legion of fans will be back next year to drink the Christmas cheer right in for the third time.