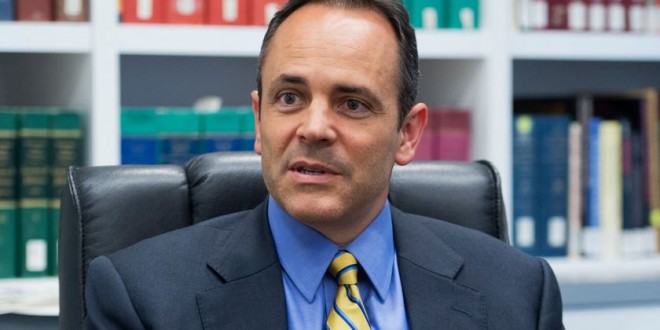 ZERO SEPARATION: Kentucky Governor Declares 2017 To Be “Year Of The Bible” Just Like He Did For 2016

Both proclamations pleased Pastor Mark Harrell of Victory Christian Fellowship church in Somerset, who said Wednesday that Bevin’s actions are in support of a statewide Bible reading marathon.

Harrell said he and Democratic state Rep. Tom Riner of Louisville, who also is a Baptist minister, asked Bevin to sign the proclamation for 2017 and “he graciously accepted as he did last year.” Riner wrote the proclamation, Harrell said.

The governor’s proclamation, which he signed Dec. 19, says 2017 “marks the second year Kentucky has led the nation in celebrating the Bible’s significant impact on Kentucky and American institutions and culture by leaders in each county taking shifts to read through the entire Bible in Kentucky’s Bible Reading Marathon beginning Jan. 1, 2017.”