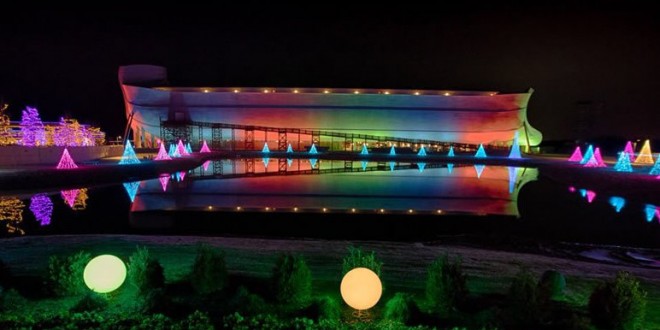 Loony tunes nutbag creationist Ken Ham has illuminated the Ark Encounter in rainbow colors because any other use of the rainbow “defies God’s command” to hate homosexuals. Or something. He writes:

In recent times the rainbow (albeit with some different colors) has come to represent something far different. To many people it means freedom, love, pride, a new era, and, specifically, the LGBTQ movement. Indeed when the US Supreme Court legalized gay “marriage” last year, the White House was lit up in rainbow colors.

But the rainbow itself wasn’t designed to be a symbol of freedom, love, pride, or the LGBTQ movement. God created this beautiful, colorful phenomenon and designated it as a sign of His covenant with Noah and his descendants forever. Sadly, people ignore what God intended the rainbow to represent and proudly wave rainbow-colored flags in defiance of God’s command and design for marriage.

Because of this, many Christians shy away from using the rainbow colors. But the rainbow was a symbol of God’s promises before the LGBTQ movement—and will continue to be after that movement has ended. As Christians, we need to take the rainbow back and teach our young people its true meaning.