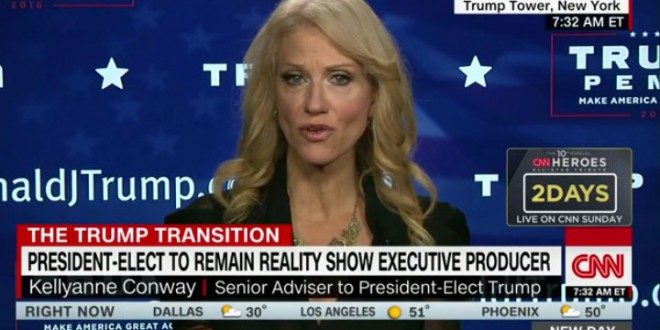 “He’s a very transparent guy. Everyone can see what he’s doing and the fact is that he is conferring with all types of experts to tell him what he is allowed to do and not to do as president of the United States. And if this is one of the approved activities, then he will perhaps consider staying on,” Conway said on CNN’s “New Day” when first asked why Trump won’t completely leave his reality television show.

Co-host Alisyn Camerota noted to Conway that any time Trump spends working for “The Apprentice” is time away from his presidential duties. “Well, okay, but were we so concerned about the hours and hours and hours spent on the golf course of the current president?” Conway asked in response. “I mean, the presidents have a right to do things in their spare time or their leisure time. Nobody objects to that.”

Obama’s golf playing has been the subject of ridicule and outrage on right wing sites for the last eight years.