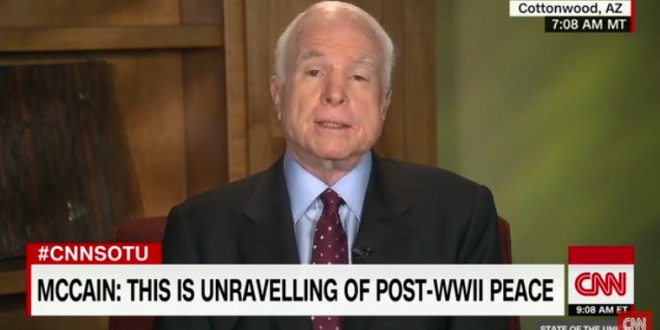 “This is the sign of a possible unraveling of the world order that was established after World War II, which has made one of the most peaceful periods in the history of the world,” McCain told CNN’s Jake Tapper on “State of the Union.” “We’re starting to see the strains and the unraveling of it, and that is because of the absolute failure of American leadership.”

“When America doesn’t lead, a lot of other bad people do,” he added. McCain’s calls so far have been rejected by Senate Majority Leader Mitch McConnell and House Speaker Paul Ryan, who have backed investigations but said they want to see them conducted through already-existing Senate and House committees.

“This is serious business. If they’re able to harm the electoral process, they may destroy democracy, which is based on free and fair elections,” he said.