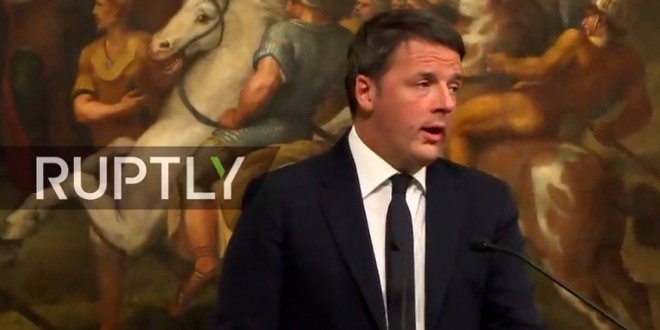 Italian Prime Minister Matteo Renzi has resigned after suffering a heavy defeat in a referendum over his plan to reform the constitution. In a late-night statement, he said he took responsibility for the outcome. He said the No camp must now make clear proposals.

An exit poll for state broadcaster RAI suggests 42-46% voted to back reform, compared with 54-58% voting No. The first projections based on the official count point to a wider defeat. Early indications have the Yes vote at 39-43% and the No at 57-61%.

The referendum was regarded as a barometer of anti-establishment sentiment in Europe. The vote asked about plans to streamline parliament but it was widely seen as a chance to register discontent with the prime minister. Populist parties supported a No vote.

Ostensibly the vote was about arcane changes to Italy’s Constitution that would have streamlined government. But opposition to the reforms came from the same anti-establishment sentiment — spiked with skepticism of globalization, open borders and the feasibility of an ever-closer European Union — that has transformed the politics of a growing list of European countries.

Such movements have already smashed the traditional political structures in Greece and Spain, and Euro-skeptic forces led Britain to vote in June to leave the European Union. In Germany, Chancellor Angela Merkel, once untouchable, now seems vulnerable in next year’s elections. And far-right parties are also seeking power in France.

In Austria, the Green Party stalled the advance of populist forces on Sunday by defeating the presidential candidate of the far-right Freedom Party, which was established by former Nazis. The result in Austria might have calmed some nerves, but it was the rejection of Mr. Renzi that most sent shivers through Europe and the world.

The populist movement founded by Beppe Grillo, a stand-up comedian from Genoa, has been at the forefront of a three-month campaign that has stirred up the deep economic and social divisions in Italian society.

Independent analysts such as Professor Erik Jones, of the Johns Hopkins Institute for Policy Research in Bologna, believe Five Star will be uniquely placed to “exploit the deep and painful fractures” in Italian society when the country elects a new parliament at some point before May 2018.

“Italians revealed a deep cleavage about how the country should be governed that cuts across mainstream parties and political elites,” said Prof Jones. “The referendum outcome does not heal that division; it strengthens the polarisation instead.”

The leaders of Italy’s most popular political party, the anti-establishment Five Star Movement, have built a sprawling network of websites and social media accounts that are spreading fake news, conspiracy theories, and pro-Kremlin stories to millions of people, analysis by BuzzFeed News has established.

Amid growing concern across Europe over the impact on democratic processes of fake news and Russian interference, Italy is shaping up to be the continent’s next major battleground thanks to the sophistication and wide reach of the Five Star Movement (M5S) propaganda machine.

This machine includes not just the party’s own blogs and social accounts, which have millions of followers, but also a collection of profitable sites that describe themselves as “independent news” outlets but are actually controlled by the party leadership. These sites relentlessly regurgitate M5S campaign lines, misinformation, and attacks on political rivals – in particular, centre-left prime minister Matteo Renzi. One of them, TzeTze, has 1.2 million followers on Facebook.