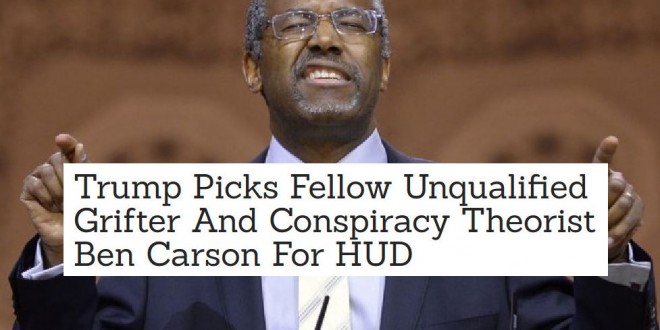 Brian Tashman lays it out at Right Wing Watch:

In November, Carson’s spokesman said that the former neurosurgeon and Republican presidential candidate didn’t want to pursue a role in the Trump administration because he has no relevant experience in managing a federal agency and the “last thing he would want to do was take a position that could cripple the presidency.” Trump himself has compared Carson to a child molester, questioned his mental stability and suggested that he is pathologically violent.

Carson, who himself has admitted that he has no background in housing policy beside the fact that he “grew up in the inner city,” has a very thin record on housing issues. In fact, most of his public comments on the subject have involved his opposition to efforts to combat housing discrimination.

While campaigning in Iowa last year, Carson denounced an agreement between HUD and the city of Dubuque to ensure that the city didn’t discriminate against people from predominantly African American communities in its distribution of federally funded housing vouchers. Carson claimed that the agreement was an attempt by the government “to infiltrate every part of our lives” and that it was reminiscent of “what you see in communist countries.”

You really should hit the link and read the full thing.