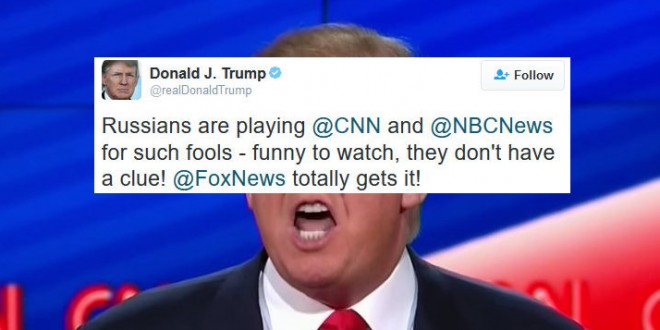 President-elect Donald Trump on Friday mocked CNN and NBC while praising Fox News over their news coverage of the geopolitical standoff between the U.S. and Russia. Trump said CNN and NBC “don’t have a clue,” while Fox News “totally gets it.”

Moscow on Friday announced that it will not take reciprocal measures and expel U.S. diplomats from Russia, one day after the United States announced sanctions and punitive measures for Russian interference in the election. Russians are believed to have hacked political groups, including the Democratic National Committee.

The president-elect voiced admiration of the Russian President Vladimir Putin in an earlier tweet, complimenting the Russian leader on his reserved response to President Obama’s actions. Several minutes after Trump’s tweet, the Russian Embassy in the U.S. retweeted the praise on its official account.

Russians are playing @CNN and @NBCNews for such fools – funny to watch, they don't have a clue! @FoxNews totally gets it!

Previous Todd Starnes Attacks “Repulsive” Mormon Choir Singer For Resigning Rather Than Perform For Trump [VIDEO]
Next TRAILER: 2016, The Movie