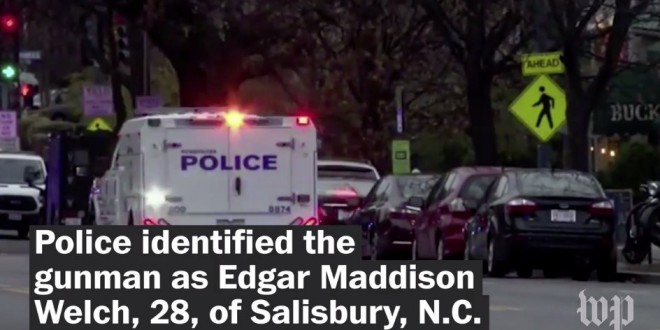 A North Carolina man was arrested Sunday after he walked into a popular pizza restaurant in Northwest Washington carrying an assault rifle and fired one or more shots, D.C. police said. The man told police he had come to the restaurant to “self-investigate” a false election-related conspiracy theory involving Hillary Clinton that spread online during her presidential campaign.

The incident caused panic, with several businesses going into lockdown as police swarmed the neighborhood after receiving the call shortly before 3 p.m. Police said 28-year-old Edgar Maddison Welch, of Salisbury, N.C., walked in the front door of Comet Ping Pong and pointed a firearm in the direction of a restaurant employee. The employee was able to flee and notify police. Police said Welch proceeded to discharge the rifle inside the restaurant; they think that all other occupants had fled when Welch began shooting.

The restaurant’s owner and employees were threatened on social media in the days before the election after fake news stories circulated claiming that then-Democratic presidential nominee Hillary Clinton and her campaign chief were running a child sex ring from the restaurant’s backrooms. Even Michael Flynn, a retired general whom President-elect Donald Trump has tapped to advise him on national security, shared stories about another anti-Clinton conspiracy theory involving pedophilia. None of them were true.

Young male who was radicalized online fires assault rifle in a crowded restaurant: change his name and people would call this terrorism. https://t.co/DI2sWshYYK