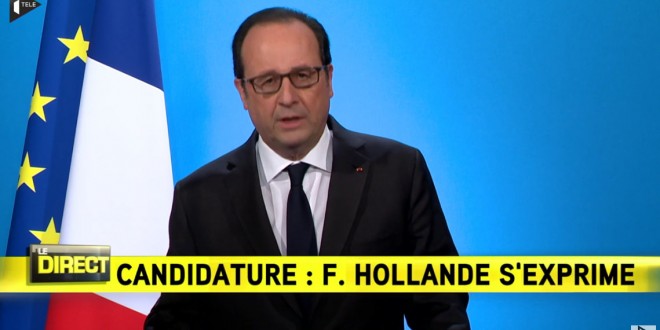 François Hollande, the least popular French president since the second world war, has announced he will not run for a second term in office. With a satisfaction rating so low it recently dropped to just 4%, the Socialist president appeared emotional as he said in a live televised address from the Élysée palace that he would not attempt to run for a second term, conscious of the “risks” to the French left. He is the first French president since the war not to attempt to run for re-election.

In his address, Hollande said he felt he had achieved many changes in his time in office, including beginning to lower France’s stubbornly high jobless figures after decades of mass unemployment. The question remains as to whether the prime minister Manuel Valls will now announce he will stand and take part in the Socialist primary race to choose its candidate in January. The French presidential election takes place in April and May.

Same-sex marriage was legalized in France in 2013 with the strong support of Hollande and his party.

Out of all the political events to keep a track of right now, France’s presidential race should be at the top of your list. On Sunday, former Prime Minister François Fillon — a hardline conservative calling for budget cuts and small government — beat off pollsters’ initial favorite and moderate Alain Juppé to win the Republican Party nomination. This means that in April Fillon will be the favorite against the woman who has the French elites quaking in their loafers — the National Front’s Marine Le Pen.

Le Pen, running on a nationalistic, anti-Islamist, anti-globalization, anti-third world immigration platform, is expected by many experts to win the first round of voting in April when there are multiple candidates on the ballot, but ultimately lose in a second round head-to-head with Fillon — the theory being that left-wingers and centrists will unite behind the more moderate Fillon against the “hard-right” Le Pen.

Yet the assumption that Le Pen slots into the “hard-right” category (and therefore holds no attraction to left-wing and centrist bases of support) is flawed, and is the same logic that led American and British pollsters to undervalue the appeal of similar movements to working class voters in places like Sunderland and Michigan.

Marine Le Pen is said to be personally “moderate” on same-sex marriage, however other National Front leaders are openly and viciously anti-LGBT and have taken part in recent demonstrations calling for the next president to repeal the 2013 law.

Previous Matt Baume Runs Down Trump’s Ten Worst Appointees And What They Could To do LGBT Rights [VIDEO]
Next MICHIGAN: Trump Forces Postponement Of Recount By Filing Complaint With State Bureau Of Elections