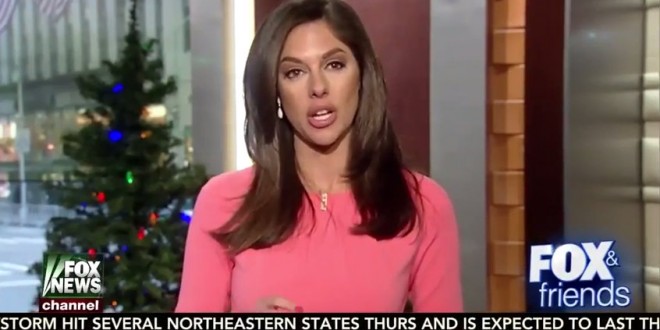 Fox and Friends host Abby Huntsman apologized on-air Friday after sharing a story about food stamp fraud that had no basis in fact. Huntsman’s apology came after she reported on that “food-stamp fraud is at an all-time high… this year, it is estimated $70 million of taxpayer money was wasted on food-stamp fraud.” Huntsman admitted the error today, reading a correction twice on-air: “We reported that back in 2016, $70 million were wasted on food stamp fraud. That was actually incorrect. The latest information from 2009 to 2011 shows the fraud at 1.3%, which is approximately $853 million for each of those three years, and nationally food-stamp trafficking is on the decline. So sorry about that mistake.”

“We are not quite sure where this came from,” a USDA spokesperson tells the Erik Wemple Blog. “We saw that there was as story on Breitbart. We have not issued a report on this recently. There is no new rate that we’ve published. So we’re not quite sure why they’re so interested in stirring this up.” The program in question is the Supplemental Nutrition Assistance Program (SNAP), which assists millions “eligible, low-income individuals and families and provides economic benefits to communities.”

Even though Fox News claims brand-new information on food-stamp fraud, the USDA insists that its most recent analysis is several years old. From 2009 to 2011, claims a USDA report, the rate of “trafficking” of SNAP benefits jumped from 1.0 percent to 1.3 percent — though that rate is down from almost 4 percent in the 1990s. “Trafficking” refers to transactions in which SNAP beneficiaries sell their benefits to retailers for cash, commonly at discounted rates; it is one form of food-stamp-related fraud.

Now here comes the mind-blowing part: Take that 1.3 percent trafficking rate from 2009 to 2011 and apply it to the 2016 SNAP budget of about $70 billion. It comes out to about $910 million, or more than 10 times the rate that Fox News claimed on its show. So even as it reported that food-stamp fraud had hit an all-time high, Fox News was actually reporting a preposterously low number for food-stamp fraud. Only a program as idiotic as “Fox & Friends” is capable of such feats.

Previous Even The Literal Nazis Hate Milo’s Book Deal
Next Putin Snubs Obama In Holiday Message To World Leaders, But Sends Greetings To Trump And Bushes