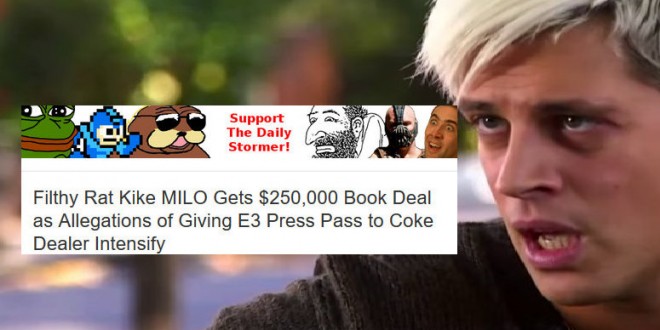 Yesterday’s news that Simon & Schuster has given notorious troll Milo Yiannopoulos a $250,000 book advance spawned widespread criticism of the publisher, with the Chicago Review Of Books denouncing “this disgusting validation of hate” with a vow to boycott covering any of their titles released in 2017. As it turns out, even the literal Nazis at the Daily Stormer are unhappy. Editor Andrew Anglin writes:

The evil Jew rat MILO – a faggot kike who other kikes once tried to make the leader of the Nazi movement – has been given a $250,000 book deal. You might say: “Who is going to be interested to buy this book? Didn’t they already try to force-meme this faggot and fail miserably?” And yes, of course they did.

They are trying it again. Because they are freaking out that the goyim know what’s going on with their Jewish scheming. They are doing anything they can to try and redirect right-wing sentiment into safe channels, so they are going to try this kike again – have him go out there and say the real right-wing rebellion is about supporting Israel, and tell us how the democrats are the real homophobes.

The whole political landscape is being terraformed. Some of the main figures in the old “conservative” movement are coming forward to support Trump and join this new populist movement, such as Sean Hannity, but others are being phased out and replaced. MILO is considered capable of filling a role in the new mainstream right-wing, which will endorse Trump but remain strictly pro-Jew. Ah, but there is trouble in paradise. MILO is about to collapse, having been caught apparently giving an E3 press pass to his coke dealer, Kevin Cordova.

The only ones happy about the book deal appear to be over at Breitbart, which today crows that advance sales for Milo’s book have “rocketed” the title to #2 on Amazon’s best-sellers list. (Leading the ranking at this writing is Carrie Fisher’s The Princess Diarist.) Milo’s book is titled Dangerous, probably because Simon & Schuster balked at using Dangerous Faggot, the title of Milo’s tour of college campuses.

In response to this disgusting validation of hate, we will not cover a single @simonschuster book in 2017. https://t.co/NAJhTgdeyX

Things supporting white nationalism can get you (2016):

The guy has freedom of speech but to fund him & give him a platform tells me a LOT about @simonschuster YUCK AND BOO AND GROSS https://t.co/CNDUDOHzke