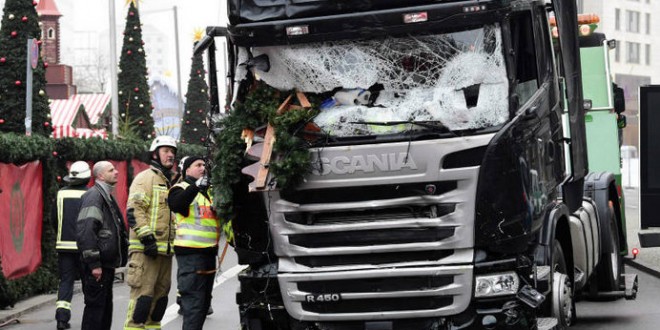 A manhunt is under way across Europe’s Schengen states after prosecutors identified a suspect in the lorry attack on a Berlin Christmas market. A warrant was issued at midnight. Details were not given but media reports say the suspect is a Tunisian man named only as Anis A, born in 1992. His residence permit was found in the cab of the lorry.

He may have been injured in a struggle with the driver, found dead in the cab. The attack claimed 12 lives in all. Some 150 police officers are said to be involved in searches in the Emmerich area of North Rhine-Westphalia, western Germany, where the suspect’s permit was issued. Chancellor Angela Merkel has met her security cabinet to discuss the investigation into the attack.

The Schengen area covers most EU states plus Iceland, Liechtenstein, Norway and Switzerland. Anis A is reported to have traveled to Italy in 2012 and then on to Germany in 2015 where he applied for asylum and was granted temporary leave to stay in April of this year. Ralf Jaeger, the minister of interior of North Rhine-Westphalia, said on Wednesday that the claim for asylum had been rejected in June but the papers necessary for deportation had not been ready.

ISIS has claimed responsibility for the attack.