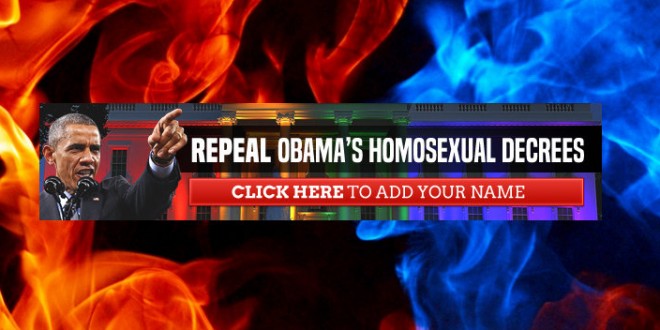 It was a dark and stormy night in Eugene Delgaudio’s warehouse full of long-haired men. He writes:

With the stroke of a pen, Obama unilaterally issued dozens of Executive Orders to reward the Homosexual Lobby for their loyal support in his elections. Acting as a one-man Congress, Obama’s decrees are taken directly from the Homosexual Lobby’s radical Agenda.

Every federal agency and every business that deals with the federal government is now under threat of a lawsuit if they fire the wrong employee or turn down a homosexual thanks to Obama.

That’s because Obama issued an Executive Order that illegally provided special “rights” for homosexuals and so-called “transgenders.” With these special “rights,” any underperforming employee can claim to be a homosexual or transgendered and threaten their employer with a lawsuit if they try to fire them.

Even our nation’s school children are under attack by Obama’s and the Homosexual Lobby’s radical Agenda. Obama required the Department of Education to threaten every school in the nation to open their bathrooms and locker rooms to so-called “transgender” students — forcing every girl to undress beside a cross-dressing male.

These are just the most egregious examples of Obama’s and the Homosexual Lobby’s radical Agenda. But President-elect Donald Trump can repeal Obama’s Homosexual Decrees his first day in office. After all, Trump did promise he would repeal dozens of Obama’s Executive Orders on day one………….”.

Previous SHE GRABBED HIM BY THE PUSSY: Scott Baio Files Charges Against Woman After Argument About Trump
Next Tony Perkins: Rex Tillerson Must Be Stopped Before He Flies Obama’s Rainbow Flag At Our Embassies