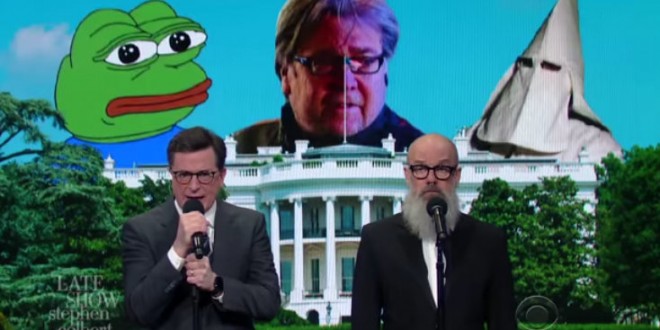 The End Of The Year As We Know It: Michael Stipe And Stephen Colbert Recap 2016’s Shit Sandwich [VIDEO]

There’s no two ways about it: 2016 was a crap year. How crap? Just ask Stephen Colbert, Michael Stipe and James Franco, who got together on “The Late Show” on Thursday night (Dec. 15) to remake R.E.M.’s “It’s the End of the World as We Know It (And I Feel Fine)” as a eulogy for a rough 12 months.

Here are some of the not-great things Colbert ran down in his year in review (Stipe was so upset he had to just stand mute and roll his eyes): Zika, Harambe, Flint’s tainted water, the N.C. bathroom bill, the fall of Fox New’s Roger Ailes, wildfires, climate change, the rise of the alt-right, Melania Trump’s plagiarism, the deaths of Prince, David Bowie and Leonard Cohen and, oh yeah, Trump, lots of Trump.