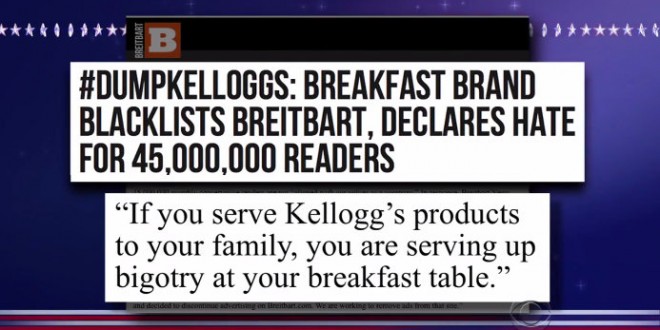 Since the election, Colbert noted that there has been a lot of scrutiny on the alt-right news blog Breitbart, or as Colbert joked Breitbart.white. “Critics say the site is a hotbed of racist, sexist and anti-semitic views while supporters say exactly the same thing,” Colbert joked.

After a lot of backlash, Kellogg’s announced they’d be pulling their ads from the site because it doesn’t align with their values. “Really is there the maker of Frosted Flakes doesn’t agree with Breitbart? You think they’d love a bright orange cartoon who promises to make the country grrrrrreat!” Colbert said with gusto.

Colbert said that in response to the company pulling their ads, Breitbart said that they were “sorry to see a valued advertiser go and would work to try to repair the relationship in the future. Just kidding!” Colbert laughed. “They actually published this article title, ‘#DumpKellogg’s: Breakfast brand blacklists Breitbart, declares hate for 45,000,000 readers’ and went on to say ‘if you serve Kellogg’s products to your family, you are serving up bigotry at your breakfast table.’”

Previous GAMBIA: Dictator Who Vowed To “Slit The Throats” Of All Homosexuals Is Defeated In Democratic Election
Next Chinese Foreign Ministry Lodges Complaint Over Trump’s Unprecedented Call With Taiwan’s President