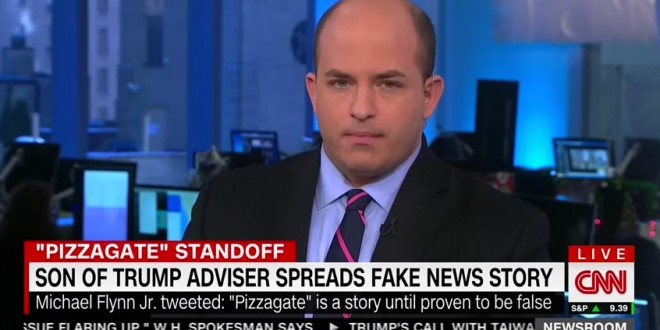 CNN’s Brian Stelter: Trump Himself Is A Conspiracy Nut And Promoter Of Fake News Stories [VIDEO]

America is swearing in a conspiracy theorist as president next month, according to Brian Stelter. “Yeah, President-elect Trump is many things,” the CNN media reporter and “Reliable Sources” host said in a segment Monday. “To his voters, he’s a beloved figure. But one of the things he is, is a conspiracy theorist.”

Stelter said Trump “latched on to a number of [conspiracy] theories” during the campaign, including an unsubstantiated claim that he saw thousands of Muslims in New Jersey cheering on 9/11.

“And he’s also in a few different cases tweeted out links to clearly fake news stories,” Stelter continued. “Now, that hasn’t happened in recent days. I would say it’s been about a week since he tweeted something that was clearly false — he said there have been millions of illegal votes. That didn’t happen.”

Stelter’s criticism of the president-elect’s propensity to propagate conspiracy theories came during a CNN segment on fake news. And it’s not just Trump who has an affection for fake news, Stelter said, noting that the son of one of Trump’s top appointees shared his interest in bogus news.

Stelter highlighted Michael Flynn Jr.’s tweet embracing the so-called “Pizzagate” conspiracy as “a very strange path to go down” that’s so farfetched that it would be funny, if not for the incident that occurred Sunday.