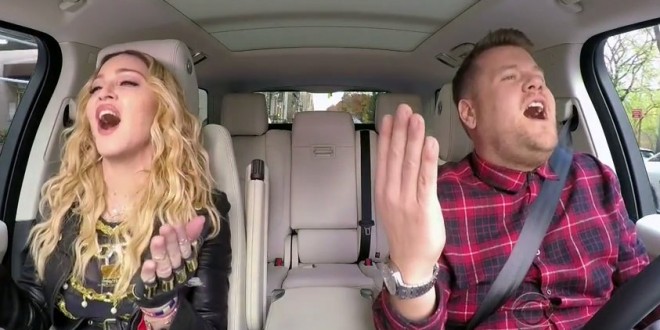 Bitch, she’s Madonna. New York City drivers, beware: The Material Girl does not like to be cut off when she’s driving. The Queen of Pop joined James Corden for Carpool Karaoke on The Late Late Show on Wednesday, December 7, and the segment began with their black SUV getting cut off by a Manhattan bus. “Let’s drive up next to the bus. I want to give him what’s what,” Madonna, 58, told the host before calling him a p–sy. “You let people get away with bad behavior, they’re gonna do it again.”

First up came “Vogue,” as the pair began singing and striking poses, including a mile-high leg in the air from the singer. Then she began twerking as “Bitch I’m Madonna” played. Then they discussed whether her children liked her new music, and the Grammy winner admitted that while her four kids “are quite rebellious,” she’s “quite square.” “When I go home, I’m Julie Andrews,” she insisted.

Corden, 38, then changed the subject to men and marriage and asked what it was like hanging out with the late Michael Jackson. “You want me to kiss and tell then, don’t you?” she teased before admitting that she had kissed the King of Pop (with tongue), after getting him to loosen up with a glass of chardonnay. “Baby, I’ve been around,” she said.