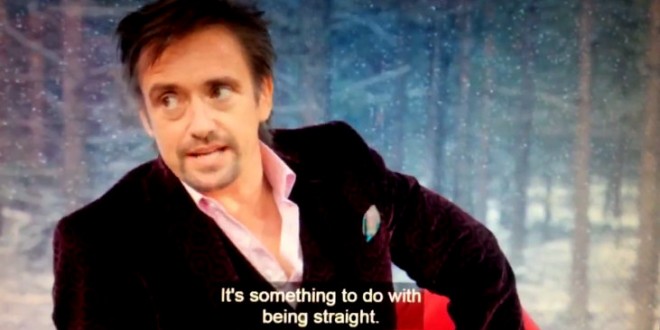 Richard Hammond has been criticised for linking eating ice-cream with being gay on the latest episode of The Grand Tour, the TV motoring show he co-hosts with Jeremy Clarkson and James May. The exchange occurred on Happy Finnish Christmas, the sixth episode of the first season of the show, which was released on Amazon Prime on 23 December.

In front of a live audience, Clarkson pointed to an image of the interior of a Rolls Royce, saying: “The only problem is that in one of those, you couldn’t enjoy a chocolate Magnum ice-cream.” “It’s all right, I don’t eat ice-cream,” replied Hammond. “It’s something to do with being straight.”

Clarkson and May appeared taken aback as members of the studio audience applauded and cheered. “Why are you applauding him?” Clarkson, apparently aghast, asked the crowd. “What do you mean? … You’re saying all children are homosexual?” Hammond continued, saying: “Ice-cream is a bit – you know”. He added: “There’s nothing wrong with it, but a grown man eating an ice-cream – it’s that way, rather than that way …”

.@RichardHammond HELLO I HAVE BEEN EATING ICE CREAM FOR YEARS AND I'M STILL HETEROSEXUAL WHAT I AM DOING WRONG PLEASE HELP