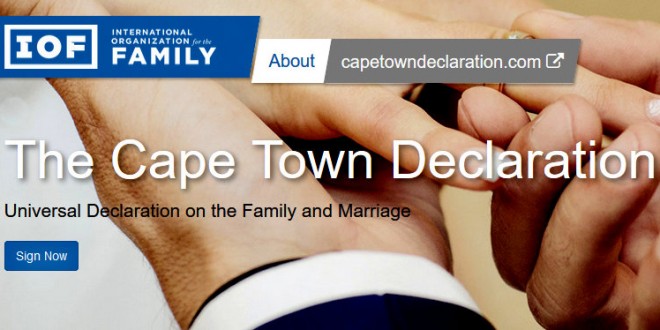 Over the weekend I reported that hate group leader Brian Brown has formed a new organization to battle LGBT rights worldwide. The group has now issued their “Capetown Declaration,” which as you’ll see mimics the US-based Manhattan Declaration in which signees vow to disobey any law that grants LGBT rights. From their manifesto:

Spanning the globe, we have no common tongue, culture, or creed. We are divided by history and geography, by social customs and forms of government. But in foundations, we are united. We are of one mind on the bedrock of civil society, on the basis of that first and primordial community called the family: We affirm the dignity of marriage as the conjugal bond of man and woman. We embrace it not as the parochial practice of any sect or nation or age, but as the patrimony of all mankind. We defend it not as a matter of preference or temperament or taste but as the heart of any just social order.

Human beings thrive in communities. And every community finds its foundation where every human being deserves to begin: in marriage. Here a man and a woman commit to join their whole lives as one family and seal their love as one flesh. They show forth the fidelity and unity-in-diversity of any healthy community. Thus do they secure for any children born of their bond, the birthright of all men: to know the faithful love of the man and woman whose union gave them life.

Healthy marriages thus make demands of couples; but wounded ones make greater demands of whole societies. A thriving culture will therefore serve marriage—and all society—by promoting purity outside it and fidelity within; by discouraging pornography, adultery and divorce; and by firmly resisting every push to redefine marriage: to include same-sex or group bonds, or sexually open or temporary ones.

We rededicate ourselves to honoring, restoring, and protecting these truths. We commit, where possible, to refuse to deal with corporations that deny them. We pledge to resist the rising cultural imperialism of Western powers whose governments seek nothing less than the ideological colonization of the family.

Together we join in common cause, East and West, North and South, to stand for a truth that no government can change. Bowing to no earthly power, using every just measure, we shall not falter or flag until the truth about marriage is embraced in our laws and honored in our lands.

Among the early signers of the Cape Town Declaration are conservative Catholic scholar Robert George, one of the Manhattan Declaration’s authors, and a George protégé, anti-equality activist Ryan Anderson of the Heritage Foundation.

Also listed as signers are a number of religious leaders, including Foley Beach, Archbishop of the Anglican Church in North America; Catholic Bishop Emmanuel Badejo of Ojo, Nigeria; Lawrence Khongy, pastor of Faith Community Baptist Church in Singapore; and Josiah Trenham, an Orthodox priest who has spoken repeatedly at World Congress of Families gatherings.