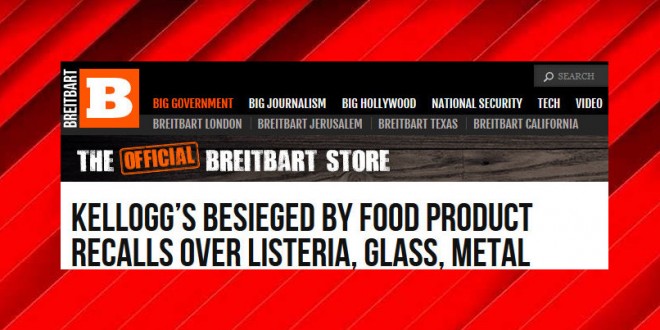 Breitbart today fired another warning shot at companies that might be considering joining an advertising ban by publishing a list of several product recalls made by Kellogg’s over the last few years.

Their article begins with this: “Kellogg’s, a company facing accusations of profiting from child labor practices at an Indonesian supplier, has also faced multiple food product recalls in recent years, some involving products marketed specifically to children in the United States.”

Breitbart’s message is simple and clear: Advertise with us or we will relentlessly publicize all dirt we can find on your company.

Breitbart’s campaign against Kellogg’s is unusual on a number of fronts, not in the least because news organizations traditionally maintain a separation between their business operations and their editors and reporters so that journalists can operate independently from business interests. And whether the boycott will help Breitbart financially appears questionable, given that attacking a major advertiser isn’t likely to make the site more appealing to other brands.

“Reporters don’t behave that way in the U.S., nor should they,” said Lee Wilkins, professor and chair of the department of communications at Wayne State University, who’s an expert in media ethics. “Most journalistic organizations have checks between the people who pay for your news work and the news work itself, so that you are as a journalist protected from those influences.”

She said she views Breitbart as a blog rather than a journalistic organization. “If you aren’t a journalism organization, then those safeguards are never in place.” Other companies saying this week that they’ll pull their ads from Breitbart include Vanguard, 3M (MMM) and AARP, among others.

Kellogg’s stock value is so far unaffected by Breitbart’s boycott.