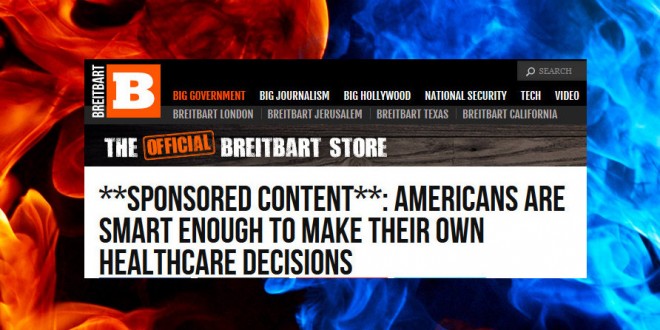 Late last month Breitbart called on their millions of readers to boycott Kellogg’s after the cereal giant declined to continue advertising with them. Unsurprisingly, Breitbart’s “advertise with us or else” threat did not sit well with other major brands, virtually all of whom have since abandoned the site. Today Breitbart’s front page contains yet another attack on Kellogg’s, below which is this sponsored pitch from a company offering something called “Christian health sharing.” An excerpt:

As a Christian healthcare sharing ministry, Liberty HealthShare facilitates the sharing of medical costs between its members, like-minded individuals who have committed to shoulder one another’s eligible healthcare costs as a group. Of course each individual has his or her own story, but Liberty believes there are a few key reasons why its members have chosen to approach healthcare costs in this unique way.

For starters, Americans are tired of being told what to think and do. Liberty HealthShare believes people are smart enough to choose what is best for them and their families. As a matter of fact, the ministry functions best when its members prize personal responsibility.

Secondly, Liberty believes people care about each other. Despite the things that divide our diverse nation, if you ask most people, they genuinely want to help one another. Healthcare sharing is necessarily about community. It’s about being there to help one another when circumstances take an unexpected turn.

Thirdly, Americans want to know where their money is going and why. The divide between patients, their doctors, and insurance companies is now massive. This has made it so that neither doctors nor patients feel they have a real stake in the cost of care. Prices are arbitrarily set, and layers of bureaucracy make it nearly impossible for patients to intelligently shop around. Making matters worse, insurance companies answer to shareholders, not patients. Participating in a healthcare sharing ministry puts control back in the hands of members and allows them to bring their doctors along as they approach their healthcare costs in a revolutionary way.

Some states have tried to block health care sharing ministries on the grounds that they are selling unauthorized insurance. A majority of states, however, have enacted safe harbor laws specifying that the ministries are not insurance and do not need to be regulated as such. However, the U.S. Department of Health and Human Services issues exemption letters to ministries that have met the criteria to operate independently of the Affordable Care Act.

Most ministries are oriented toward practicing Christians, with restrictions like abstaining from sex outside of marriage, excessive drinking, tobacco, and illegal drugs. They usually require members to make a statement of belief as well. For instance Samaritan Ministries requires a statement of Christian faith including belief in the triune God and divinity of Jesus; Liberty HealthShare is more inclusive, accepting members with a wide variety of religious and ethical beliefs. All such ministries require that members subscribe to the ethical principles of individually responsibility for health, and helping others in need.

Over 428K have signed Breitbart’s pledge to boycott Kellogg’s, but the company’s stock price has not been affected.

Previous Mike Huckabee: “Vain Obama” Insulted Hillary By Saying He Could Have Beaten Trump [VIDEO]
Next Trump Surrogate Carl Paladino: I Was Just “Wired Up” When I Said All Those Racist Things About The Obamas