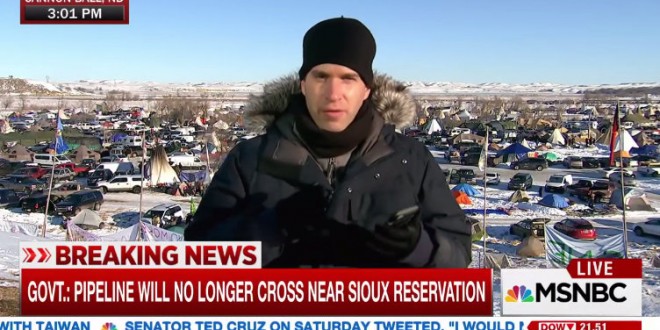 U.S. Secretary of the Army Eric Fanning has informed tribal leaders that the Army Corps of Engineers will halt construction on the controversial Dakota Access pipeline, the chairman of the Standing Rock Sioux tribe said here Sunday.

Dave Archambault II said the Army has denied the permit to bore under Lake Oahe, the reservoir behind the Missouri River in North Dakota. Native Americans and environmentalists have camped out near the lake for weeks protesting the 1,172-mile pipeline, which is intended to carry crude oil from the Bakken oil region in North Dakota to a distribution hub in Patoka, Ill.

“I wanted you to hear it from me,” the chairman said as people banged drums, danced and cheered in glee at the snowy camp. The Missouri River portion of the pipeline was the only remaining contested portion. A federal lawsuit in Washington, D.C. is still pending.

The easement marks a stunning victory for pipeline protesters, who for weeks have gathered at an encampment in southern North Dakota. The Standing Rock Sioux tribe and others who have joined them wanted changes made to the route of the pipeline, which is largely complete except for a short segment underneath a Missouri River reservoir. They said the pipeline could pollute drinking water and threatens sacred sites.

MAIN Coalition, a pro-pipeline coalition, called the move a “purely political decision.” “Unfortunately, it’s not surprising that the President would, again, use executive fiat in an attempt to enhance his legacy among the extreme Left,” a statement from MAIN said. “That the President continues to believe that he is above the law is simply un-American and it is this arrogance that working class Americans soundly rejected on November 8. For millions of hard-working people across the heartland, January 20 cannot come soon enough.”